The results for my hard disk aren't what I expected.

There are many factors that affect the disk test results in a Windows environment. Here are the main ones:

PerformanceTest attempts to measure the non-cached disk speed. In some circumstances, e.g. when the compression driver is in use, the operating system ignores the request not to cache data. This can lead to strange looking results. Typical disk speeds are in the range of 50MB/sec to 100MB/sec and numbers of above 300MB/sec probably indicate that the cache is interfering with the result.

This test creates a large test file on the disk under test. The file is then read randomly; a seek is performed to move the file pointer to a random position in the file, a 16KB block is read or written then another seek is performed. The amount of data actually transferred is highly dependent on the disk seek time. 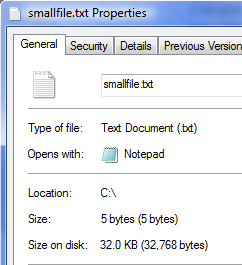 Versions of PerformanceTest later than 3.2 display the cluster size of the disk. In earlier versions of the software you'll need to check it yourself. Find or make a file on your hard disk with just a few bytes in it. Then while in Explorer right click on the file and select properties. Compare the values for 'Size' and 'Size on disk'. You can see that in the smallfile.txt example (left) that the disk is used extremely inefficiently (0.015% efficiency in fact). This is because this disk has been formatted with 32KB clusters. If the disk was formatted with 4KB clusters (top right) the results would have been very different (0.12% efficiency, a 8 fold improvement).