There are many fake capacity USB flash drives on the market that claim a particular capacity, but only delivery somewhat less than this (particularly the larger drives). This is sometimes refered to as fake 'oversize capacity'. The counterfeit drives we have examined appear to have the stated capacity in Windows Properties and it is not until you test the drive with BurnInTest that you see that there is significantly less real space.

There is also a similar problem of low quality drives (which may or may not also be counterfeit). These drives might have the capacity they state on the box, but be of such low quality that they corrupt files or lose data stored on them.

While many stores, such as Ebay and other online auctions, provide information on how to detect some of these fake USB flash drives, they generally rely on physical markings on the drive, such as incorrect serial numbers or typing mistakes on the packaging. Of course this only works for well known documented cases of counterfeit drives.

Using BurnInTest you can actually test whether your USB flash drive has the amount of storage it claims or not, and test the ability of the drive to store and retieve data without corruption. BurnInTest can be used to write, read and verify large amounts of data to and from the drive, detecting oversize capacity and poor quality drives in the process. This process assume you already have a licensed version of the the BurnInTest software. (You can use the eval edition of BurnInTest, but the eval edition is limited to 15min runs which might not be not run long enough to test large drives)

Check that Windows Properties shows that the drive has the size stated. From Explorer, navigate to the USB drive and right-click properties and check the Capacity shown. This should (approximately) match the stated drive capacity, which is usually printed on the outside of the drive, and / or on the box.

Use BurnInTest with the following settings to test that the storage is really there.  In Configuration->Test Duty Cycles, select the Disk test, set Disk Duty cycle to 100%, duration to 0 (or a long period of time) and set number of cycles to at least 100. Turn all other tests off. 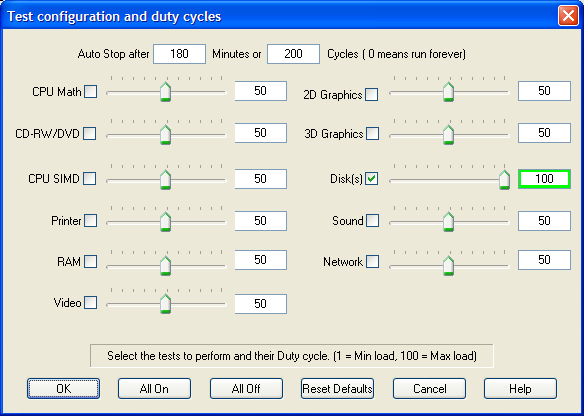 In Configuration->Preferences->Disk, select the USB drive to be tested, set the File size to be 1% and the block size to the maximum (currently 1024KB). 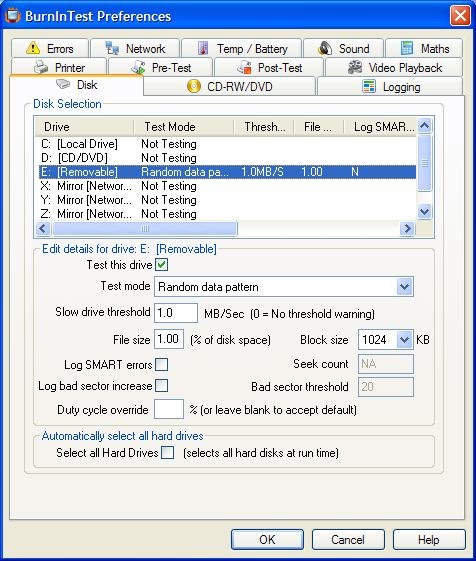 Run BurnInTest. If the drive does not have the stated capacity then BurnInTest will report an error. In the cases we have seen, a "Data Verify failure" will be displayed. While it looks like the drive has the stated capacity in Windows Explorer, in the cases we have seem, the drives simply use a repeat of a 512 Byte block of previous real data for files where there is no 'real' storage space.

In the small test window you can see how much of the drive capacity has been tested and the current speed. Check that the entire drive capacity gets tested and check the speed is reasonable. Newer USB2.0 drives should peak above 5MB/sec. 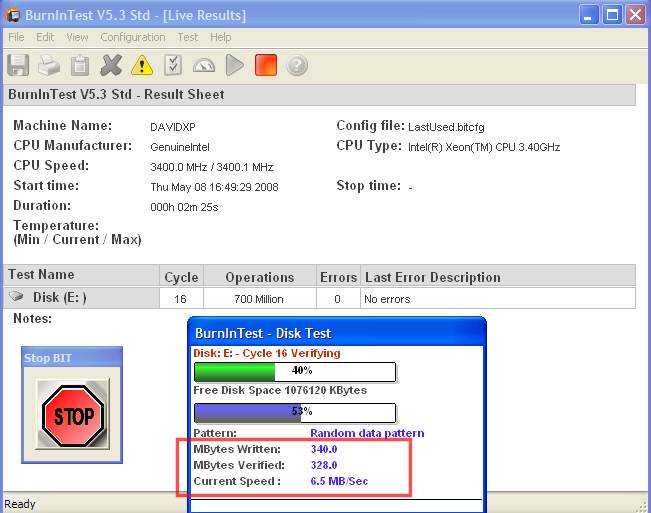 More details on the web

Head back to the BurnInTest FAQ page.