Since the introduction of the Maximum CPU Temp test in BurnInTest 6, it's been a vital tool for PC enthusiasts and overclockers looking to verify CPU and cooling system reliability and stability with a maximized heat generation torture test. In the newest version of BurnInTest (V9 Build 1000), we've optimized the heat generation feature to produce higher temperatures in shorter times for torture testing multi-core CPUs.

To test the effectiveness of our new heat algorithm, we've conducted a small benchmark test comparing BurnInTest to other CPU stress test utilities available on the web. The products we have benchmarked are BurnInTest Professional, Prime95, Core Damage, OCCT and Hot CPU Tester Pro.
For more information about the products we have tested, our test tools or test methodology, please see below.

The graph below compares CPU temperatures in degrees Celsius over the duration of an eight minute stress test: 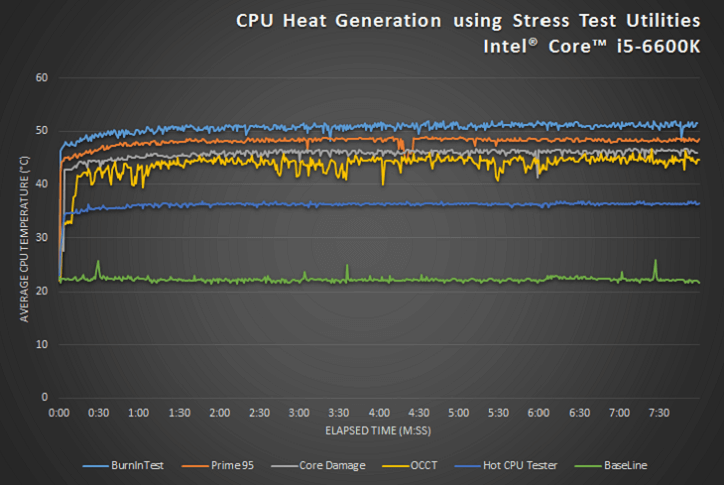 Our results demonstrate that:

For our CPU Heat Generation benchmark test, we have tested the following versions of utilities:

All tested utilities, including BurnInTest Professional, were either free or evaluation copies of commercial software. Testing was performed on 64-bit versions of software.

To measure the temperature of the CPU, a third party utility named RealTemp (version 3.7) was used.

RealTemp was configured to log the temperature of each CPU core at a rate of one sample per second for a total of 480 temperature samples over eight minutes. Our results show the average of two temperatures (one for each core) for each second over the duration of a stress test.

For each stress test utility, we conducted the benchmark using the "Heat Generation" setting, for example, we used the 'Small FFTs' mode for Prime95 which maximizes CPU heat generation. Where a heat generation specific setting wasn't available, we conducted a CPU torture test on default program settings.

For comparison purposes, we have also obtained a baseline which shows the average temperature of the CPU during system idle. Between testing applications, the machine was left idle until the CPU temperature had returned to the baseline figure (approximately 10 - 20 minutes).

Notes on our Testing